Why Lilly Singh Is A Bawse 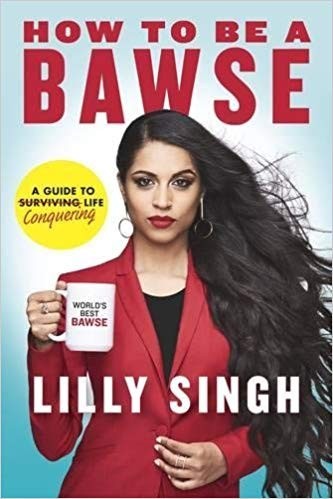 In addition to launching positivity, enhancing campaigns like,” #girllove”, and being a UNICEF goodwill Ambassador, Lilly Saini Singh, Aka Superwoman is a Canadian YouTuber, comedian, talk show host and an actress.

Since 2014, Lilly Singh has been featured in the annual YouTube Rewind every year.

She was also ranked first on the 2017 Forbes Top Influencers List, in the entertainment category and named one of the 40 most powerful people in comedy in 2019.

In March 2017, she officially claimed her title as a bawse when she released her first book,” How to be a Bawse”,” A Guide to Conquering Life”, which became a No1, New York Times best-seller.

Lilly anounced her NBC late night show in March 2019, and on the 16th of September 2019, it premiered with a musical statement, in which she fearlessly introduced herself .

During her introduction, she reminded the world how unapologetic she was about who she is and the aspects of herself which put her in the minority camp.

Some might even have described Lilly as a workaholic.

For several years, Lilly maintained a strict schedule of two weekly uploads on her main youtube channel and daily vlogs on her second channel.

In between, she made music, toured the world, acted in some movies, did charity work and so much more.

She gave us a glimpse into how hard she works on her daily vlogs.

Lilly’s success can be credited to working hard, putting in the hours filming, editing and promoting.

I remember one of her fellow YouTubers mentioning, he keeps telling Lilly to come join them have fun, but she is always working.

2. Step Out Of Your Comfort Zone

One of my favorite Lilly Singh’s Videos is the one in which, she tells us her secret to success.

Her big secret is, stepping out of her comfort zone.

Doing the things which might be challenging but most rewarding.

Taking the risk against tradition she doesn’t believe in, being outspoken about her believes.

Over the years, Lilly has done numerous collaborations with her fellow social media stars and traditional celebrities.

Lilly has this thing, where during the month of December, she does 12 collaborations with 12 different people.

Lilly believes in working together to grow together.

The Liza Koshy ***(include link of Liza Koshy), Lilly Singh collaboration was one of my favorite, two ladies at the top of their game working together, dinishing any rumors of rivalry and introducing their fans to each other.

One of Lilly Sing’s closest friends till date is, Humble The Poet.

I remember seeing Humble the poet, in Lilly’s vlogs back in the day, even before she moved to the USA.

Maintianing this friendships with people who knew you way back, will helps keep you grounded.

5. Don’t Take Yourself Too Seriously

One of the best things about Lilly is her willingness to talk about the down times.

She will to laugh at herself.

Some of her most funny videos are even based on funny things about herself and experiences she has been a part of.

6. Be Understanding Of Other People ( Put Yourself In Their Shoes )

During an interview with Jay Shetty on his podcast, Lilly Singh spoke about her improved and better view for the reason why her parents believed or acted in certain ways.

She confesses that in her younger days, she approached her parents contradicting views as, they not understanding her and not willing to make an effort to.

Now, she believes everybody has a background story, which has molded certain views and what they believe possible.

She realised, better and stronger bonds, could be built when we put ourselves in others shoes, when we take the time to see where people are coming from.

7. Make Good Use Of The Opportunity To Dive Into Your Soul

Lilly Singh had long ago talked about starting her youtube channel, as a means to getting over her depression.

Doing youtube videos for Lilly was a way to find happiness and purpose.

So one benefit of this dark period to Lilly, was the awakening of the desire to start a successful Youtube career.

She also credits this period for some of the life lessons and principles she lives by today.

She during this period she had the time and desire to dive into her soul and when she did, she helped a better version of herself image.

8. Do What Makes You Happy

She decided to work hard at doing what made her happy, despite the lack of experience or substantial gain.

True, she was later able to make a living doing this but she credits her consistency and durability to her love for what she does.

9. Be Obessed With Growth

Lilly is obsessed with growth.

She is so obsessed, she is willing to spent hours in order to attain it.

From making Youtube videos alone in her room to hosting her own late night NBC show, this is the result of her continuous obsession.

Lilly started making videos with no prior knowledge of editing or proper filming techniques, she challenged herself to get better at doing what she loved.

After 25 years, Lilly Singh left her friends and family behind to move to the USA, in order to further her career.

After moving to LA , despite the success she was having on Youtube, Lilly kept on auditioning for movie roles.

Lilly Singh recently took up the challenge to host her own late night show.

Growth always comes after the challenge, growth in itself is challenging.

Lilly also talks about the danger in taking things for granted, even things we once strongly desired.

It is important to always check ourselves to make sure we are not lossing our gratitude for our great situation because it has become our normal.

We need to always remember how far we have, come and how privileged we are to have opportunities nad experinces many will kill for.

12. Don’t Be An UnGenuine Role Model

Lilly says the monet in time when she realise she was now a role model to so many, she made the decision not to do things she didn’t believe in or didn’t enjoy just for the sole purpose of being a role model.

She decided to be real to herself and her fan.

She wants to be the role model who encourages others to live their truth.

13. Use Your Platform For Positivity

One other decision Lilly Singh made after discovery, as a role model was to use her platform to spread positivity.

She kept her word by launching the #girllove campaign in which she promoted the end of the,” girl on girl hate”.

Lilly also shows her determination to maintain a positive environment, by endeavoring to limit talking about or reacting to hate comments and disses from other influencers.

Throughout Lilly Singh’s career, the have always been people saying she is not good enough, she is not genuine enough, not funny enough and so much more.

Even presently, as the host of her own late night show, “A Little Late with Lilly Singh”,she has gotten so many negative reviews and people boldly voicing out negative predictions about her show.

Lilly’s choosen response to all of this is, ignoring the hate and deciding to focus on the thousands of suppport and positive feedback.

She works hard to make those who believe in her proud, and is glad they did and tries not to pay much attention to the haters.

15. Your Wedding Doesn’t Have To Be Your Defining Moment

Coming from a culture in which so much importance is put on marriage, Lilly said she made decisions about her wedding dress before knowing what she wanted to do in future.

She things getting married is wonderful but she also believes it is over rated, it doesn’t have to be a defining moment in our lives.

There are other things, world changing achievements which could take that place.

Back in November of 2018, Lilly Singh anounced her break from Youtube.

She decided to take some time to focus on her mental health.

During this period Lilly focused on therapy, spending time with friends and family, taking care of her health.

True, some of us are in positions in which taking breaks will literarily lead to starvation for ourselves and our dependents, to you Lilly says, as little as 30, 20, 10 minutes spent a day, just being still, could go a long way to help our mental health in the short and long run.

17. Create Balance Inorder To Be The Best Version Of Yourself

After her break, Lilly Singh decided to create more work- life- balance, as she soon realized this was the best strategy for her mental health.
Inorder to do this, Lilly dropped her uploading schedule from twice a week on her main channel to whenever she felt like and several times a week on her Vlog channel.

True, Lilly has taken up more with her late show, but she tries to always find time within her day for meditation.

This I can definitely relate to, that is, being better at giving advice than putting it in practice.

Lilly Singh realised after a self evaluation, she was not putting into practice some of wisdom she shared.

After this realisation she decided to regularly check herself to make sure she is practicing what she preached.

Lilly says loving ourselves is interwined with being okay with asking for help.

We need to love ourselves enough to be willing to request for the help which will help us maintain our mental sanity.

20. Put Priority Into Your Relationships

True Lilly jokes alot about having no friends but during a recent interview she revealed that she spents most of her time with people who she pays to be around her and after some reflection realised she was mostly to blame.

In order to change this she decided to put more time and effort into maintaining relationships with people who are not on her payroll.

21. Be Honest With Yourself

The worst and most detrimental person you could lie to is, yourself.

In order to take the necessary steps for any positive change in your life , you need to begin by accepting you have a problem.

Your honesty to yourself about your weakness is the fondation to finding the solution.

Lilly Singh says this is a very essential tip for a healthy and successful lifestyle.

it is really amazing everytime I watch a Lilly Singh vlog and she expresses her astonishment that, people look at her like a big deal.

After having one of the most successful youtube channels, going on several tours, writing a New York Times best seller and now hosting her own late night show but still, she desires everyone to treat her like a friend they can be real with.

When Lilly Singh was asked about what makes her a heroine, she responded that it was her great work ethic.

We have previously spoken about how hard Lilly works, what we didn’t mention is that she does so even on days when her health is not at 100 percent.

Lilly doesn’t just put in the work on convenient days but, also on emotionally challenging days, days when she doesn’t feel like waking up.