Why I Talk A lot About Jay Shetty 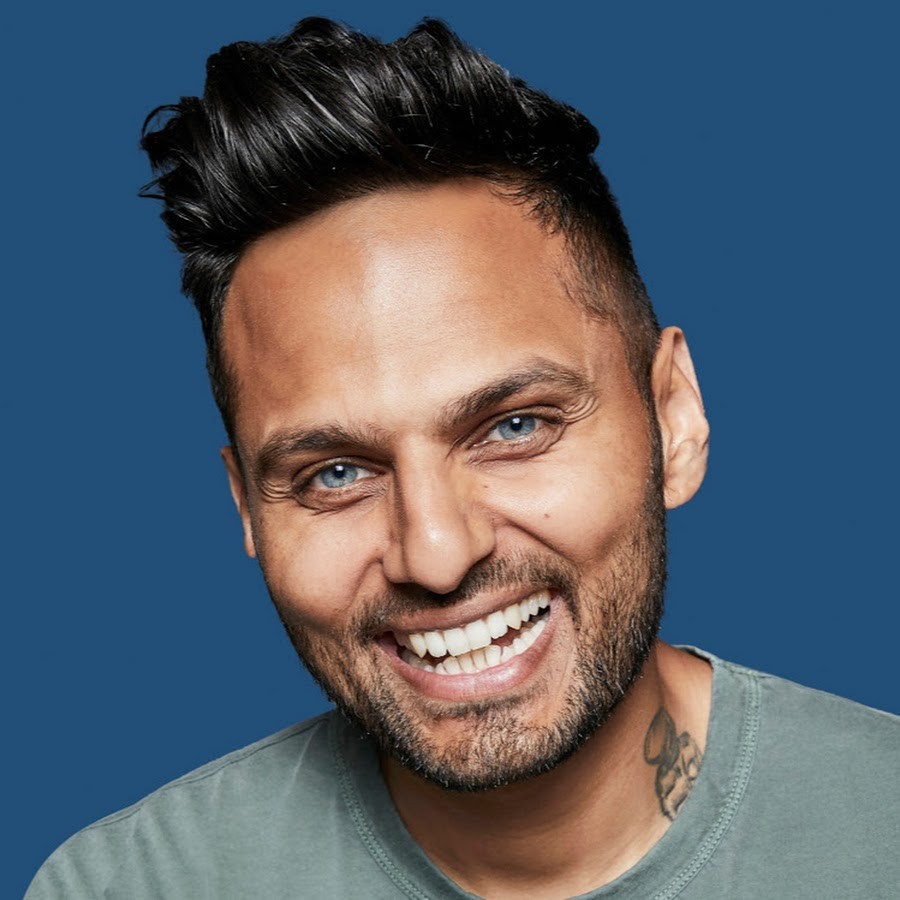 The is a reason why a majority of the motivational articles I have written include the name, “Jay Shetty”.

Jay Shetty has been a principal source of motivation for me.

Jay Shetty went from being a teenager focused on drugs, drinking, partying, crime and girls, to a monk and presently, to one of the most motivational humans out there. 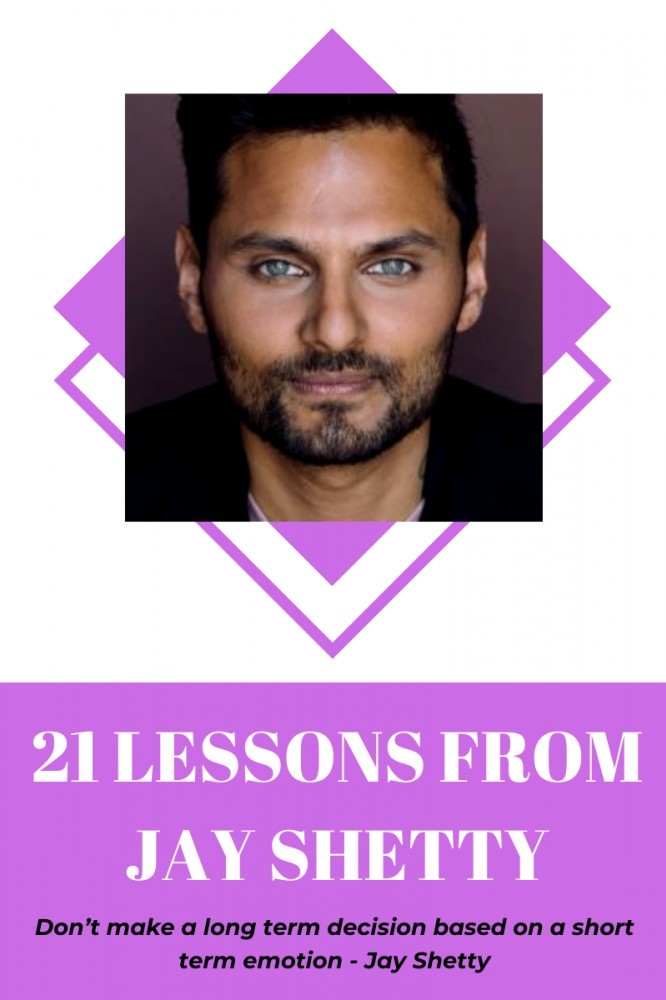 During JAy Shetty’s Monk training, the first thing he was required to practice was his breathing.

Breathing has an impact on our emotions and state of mind.

With proper breathing skills, we can learn to control our emotions, react better to certain situations and improve our mental health.

Jay Shetty says he fell in love with reading when he was 14 years old and, was given an autobiography.

Before then, Jay Shetty hated reading.

This thought him that, we all can fall in love with reading as long as we find the right book.

Personally, I have enjoyed reading different types of books at different points in my life and, when I try to force myself to love a certain type of book because it is recommended by many, I end up causing my love for reading to diminish.

When Jay Shetty was asked why he decided to become a monk, he said, one of the captivating factors was, how happy the first monk he ever met was.

Before meeting this monk, he had listened to and met numerous successful people in diverse fields but, he never got this sense of immerse happiness from any of them.

So, despite the fact that he was financially sufficient and was about to begin a very good job, Jay Shetty decided to go for this lifestyle which will give him the happiness he desired.

” Plant trees under whose shade you do not plan to sit”, are words that Jay Shetty endeavors to live by.

Living a life of service, giving for the sole aim of extending a helping hand.

This has been proven to be the surest way to live a happy life.

5. We Are Always Learning

Many people have the believe that Jay Shetty is this all put together, perfect individual but, he makes it a point to remind people of his continuous growth.

He has also previously mentioned he is allowed to inspire others while he works on himself.

During his Podcast, “On purpose”, he sometimes astonishes the guest when he highlights some of the lessons they teach him during their conversation.

When Jay Shetty was asked about how we could know our true friends, he responded with ” time will tell “.

As we grow older we get to know those who are great to keep around for our growth.

This is a lesson we can get from every successful person.

Every success stories include hours and sleepless night of intensive work.

Like Jay Shetty, they all make us realize that success doesn’t come overnight.

Jay Shetty literally had to travel across the world, detach himself from the world he knew and gave it his all, to develop the state of mind and principles he shares with us today.

A day after quitting his job with the Huffington post, and was on the vedge of going broke, Jay Shetty decided to send messages to every person he knew, telling them of his skills and how he could be of help to them.

The steps he took after that day led him to his present status of owning four multi-million dollar companies.

Jay Shetty’s Humility comes across in his actions and words.

His acknowledgment of his flaws and imperfections, despite the wisdom he shares and shows.

His humility is shown in his willingness to reach out to other creators for collaborations and support.

This humility is one of his many positive qualities which leads to his widespread success.

9. Make The Most Of Every Opportunity

Jay Shetty talks about several stages in his life and some lessons he learned during those times, which guide his actions today.

When Jay Shetty decided to become a monk, we went all in, he decided to make the most of this opportunity in a quest to become the best version of himself.

When Jay Shetty was offered a job by Arrianna Huffington, he decided to take this opportunity and make the most of it, despite the fact that, it meant moving to a different country, a country far from friends and family.

Jay Shetty talks about taking advantage, to practice his public speaking by making use of the opportunity he was given to give talks at universities, he never let the unpopularity of his talks stop him from making the most of this opportunity.

Jay Shetty’s insistence to stay positive in his videos does not in any way mean a lack of negative comments directed at him.

He had decided to take the approach of ignoring the hate and focusing on love.

Of recent, a certain lady made a video exposing Jay Shetty, her video was picked up and shared by many websites and many expected and wanted Jay Shetty to respond to her accusations but, what she has seen from him is, lack of acknowledgment of this video.

He keeps creating content which promotes his goal of adding more light to the world.

Like many social media influencers, Jay Shetty uses this method for growth.

I have seen him create content with a variety of people, from fellow motivational speakers to social media comedians and vlogger.

I have seen him even do collaborations that take him out of his comfort zone.

Jay Shetty has created content with Lilly Singh, Liza Koshy, Logan, Humble the Poet, Lewis Howes, and so many others.

12. Go Experiment With Whatever Excites You

Jay Shetty says, the reason why you doubt your choices is because you have not taken the time to experiment with all the things which excite you.

He took the step to experiment with becoming a monk before fully diving in when he enjoys the lifestyle.

Sometimes, the things which excite us might seem mutually exclusive but, with time it all comes together.

Jay Shetty frequently talks about his love , and experimenting with hip-hop and spoken word and we can hear the spoken word influence in the inspirational videos he shares

Jay Shetty says he uses his podcast as a means to skip the small talk and have deep, impactful conversations with truly inspirational individuals.

These conversations are not only enlightening to the listeners but Jay himself has confessed to being greatly influenced by them.

Jay Shetty met Alex Kushneir back in 2017 at the Huffington Post.

He got to see some of Alex’s works and his ability to create viral content.

Two years after, when Jay Shetty decided to start a viral content  creation company, Icon Media, he knew the best partner for this new venture was Alex Kushneir, a guy who had previously created content with millions of views.

15. Always Remember Why You started

Jay Shetty says one thing which helps him stay on track is remembering why he started.

This, not only guides his actions, but it also keeps him going, on days when he doesn’t feel motivated.

When Jay Shetty was asked about an alternative method for people to practice meditation without living the monk lifestyle, he made us aware of a very practical and efficient way, to unite our minds and bodies which is the main goal of meditation.

This is by limiting multitasking.

Doing one thing at a time and focusing on just that.

This not only helps us have a less tangled mind but it also helps get more quality work done.

He could have panicked at this moment but, he decided to put into practice one of the things he learned as a monk which, was not judging the moment.

Things change with time, you can not act like this moment is an unchangeable end.

You need to take steps to get to the possible better moment.

18. Don’t Forget About What Got You To The Top

Jay Shetty cautions us to always remember and keep the habits and mindset which got us to the top.

Once we forget and give up on the ways which led us to success, we start declining.

Sometimes, we could get comfortable at the top and think we don’t need to do as much.

Like the saying goes, ” Getting to the top is hard but staying at the top is even harder “.

19. Find Where You will Be At Your Best

We all have our optimal environments.

It is very important to find the place, time or components which work best for you.

Some people strive in noisy places while others need graveyard silence.

20. No Such Thing As Overnight Success

Jay Shetty is presently 31, he began studying the message he spreads today at 18.

From 18 to 22, Jay Shetty used to give talks at universities for free.

He used this period to practice and improve his content and delivery.

Though we began seeing Jay Shetty’s work some three years ago when he shared them online, he had been motivating people offline for several years back.

The success we see is always based on tones of underground failures and tests.

Sharing your story is a very powerful way to connect with people.

True I love watching Jay Shetty’s video but, what really captivated me about him is his story.

Every time I watch Jay Shetty’s interviews or podcasts, I get to hear a new part of his story which makes him more relatable and inspiring.

Pre-order a copy of Jay Shetty’s book ” Think Like A Monk ” on Amazon.
Sources