Oprah’s Boyfriend Said She Wasn’t All That

At 24 years old her boyfriend broke up with her. Telling her, her problem was she thought she was all that. She tried to make him stay by repeatedly saying ” No I don’t think I am all that”. This is one of many Oprah stories about her younger self which makes me believe in things getting better.

I could talk for days about how impactful Oprah is to my life and the lives of many successful people I know. Her ability to be compassionate and patient enough to dive into the challenging emotions others face makes the advice she gives always relatable and welcoming.

So let’s talk about a few of Oprah quotes to live by, especially during tough times.

10 Oprah Quotes To Live By 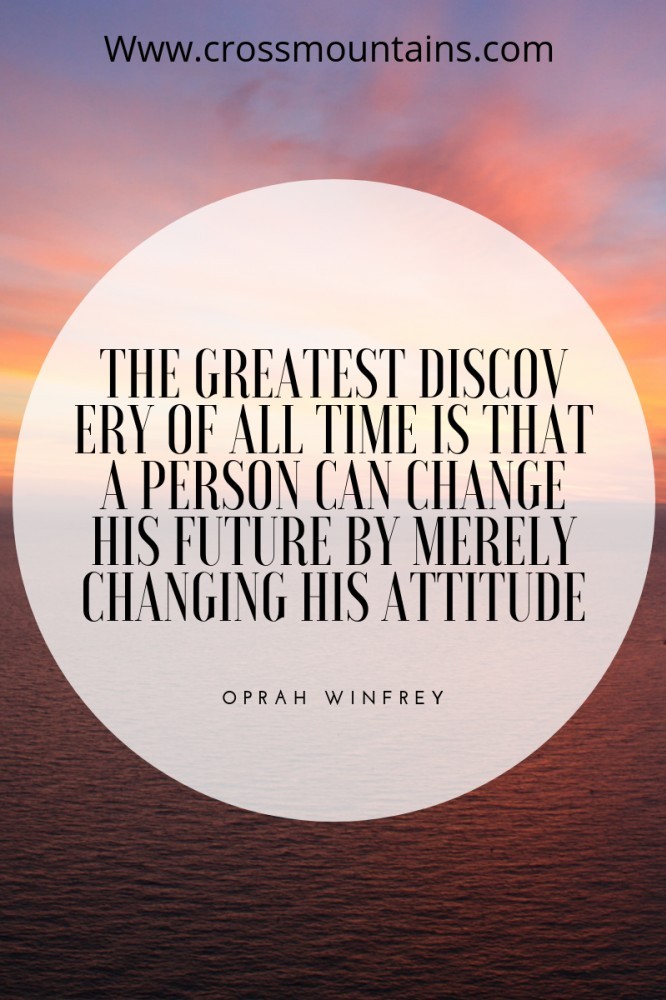 Oprah has been able to attain the level of success she has as a result of her attitude towards various happenings in her life, both challenges, and successes.

One of my favorite Oprah stories was how she got the part of Sofia in the color purple.

In this video, Oprah talks about first reading a review of the color purple at a bookstore and feeling like this was her story. So she returned to the bookstore and bought every copy of the Color Purple they had and giving it to everyone she knew at work. She became obsessed with getting people to read this book.

When she heard Steven Spielberg and Quincy Jones were producing this movie, she began telling people she will find a way to be in this movie. Some days later she got a call from a casting agent telling her auditions were going on for a movie called Moon Song.

So she goes for this audition on a very cold day, she had a cold and a swollen throat. When she walked into the audition room, she realized it was the color purple. She auditioned for a major role, Sofia whose husband was Harpo, which is Oprah backward, she felt this was a sign.

Sometime past after the audition and she doesn’t hear back from the casting agent, so she decided to call him. He wasn’t very pleased to receive her call and proceeded to tell her she was not a real actress, there were real actresses auditioning for that same part.

Oprah felt discouraged and associated not getting the part to her being fat, so she decided to go to a fat farm to lose some weight. While there she felt motivated to talk and Sing to God until she got to a stage when she surrendered the outcome of her audition to God.

Immediately she got to that point, someone came running towards her and informed her she had a phone call. she answered the called, it was Steven Spielberg, telling her she got the part of  Sofia. He also told her she could lose the part if she lost a single pound.

From this life-changing Oprah story, four winning attitudes stand out;

Another instance in which Oprah showed an inspiring winning attitude is when she decided to end her journey as host of the Oprah show. She decided to take up another challenge of starting her own network in which she could talk about only topics she was inspired by.

She faced numerous challenges and realized she had a lot to learn about what it took to have a successful network.

According to Wikipedia, as of February 2015, OWN was available to approximately 81.9 million pay television households (70.3% of households with television) in the United States.

Taking up this journey she showed; 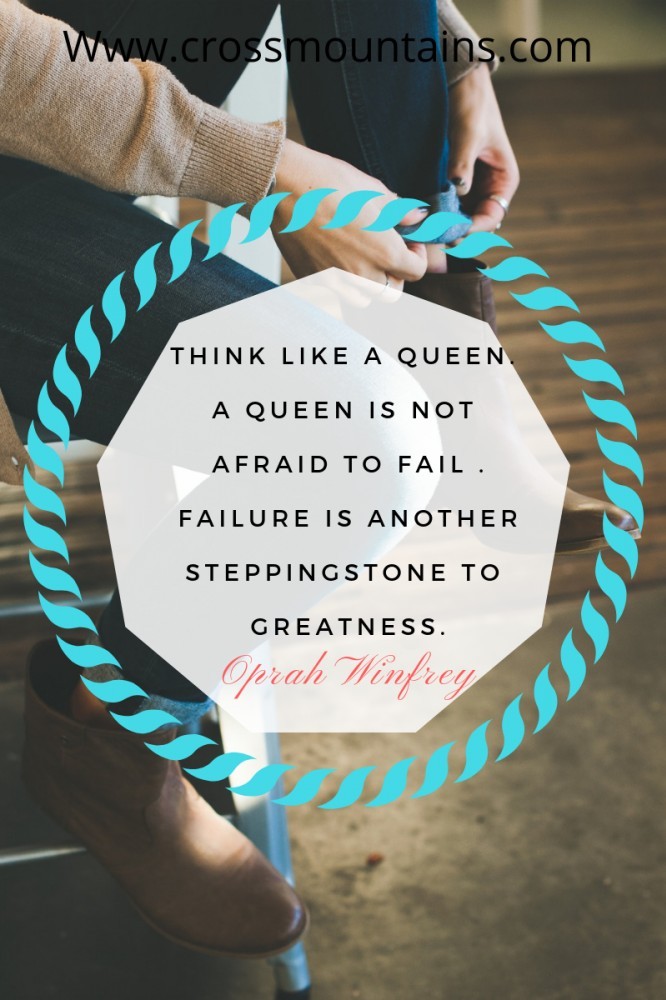 This is one of my favorite Oprah quotes to live by. She redefines what we mostly believe about queens. so many of us think queens do not fail, queens always win.

In reality what happens is, they fail their way into great success. Success so great that it makes people forget or careless about their past failures.

At the start of Oprah’s career, she had the opportunity to be a primetime news co-anchor. This show failed and all the blame for the failure went to Oprah, not to her older, white male, co-host.

As a result of this, she was demoted to writing and reporting gig. During this period, Oprah did some soul searching and realized she preferred roles which involved human interaction, rather than cold hard news.

This period of soul-searching governed her future career steps, which led to her outstanding success.

So Yes, like the saying goes failure is a steppingstone to success and Oprah’s story proves just that. 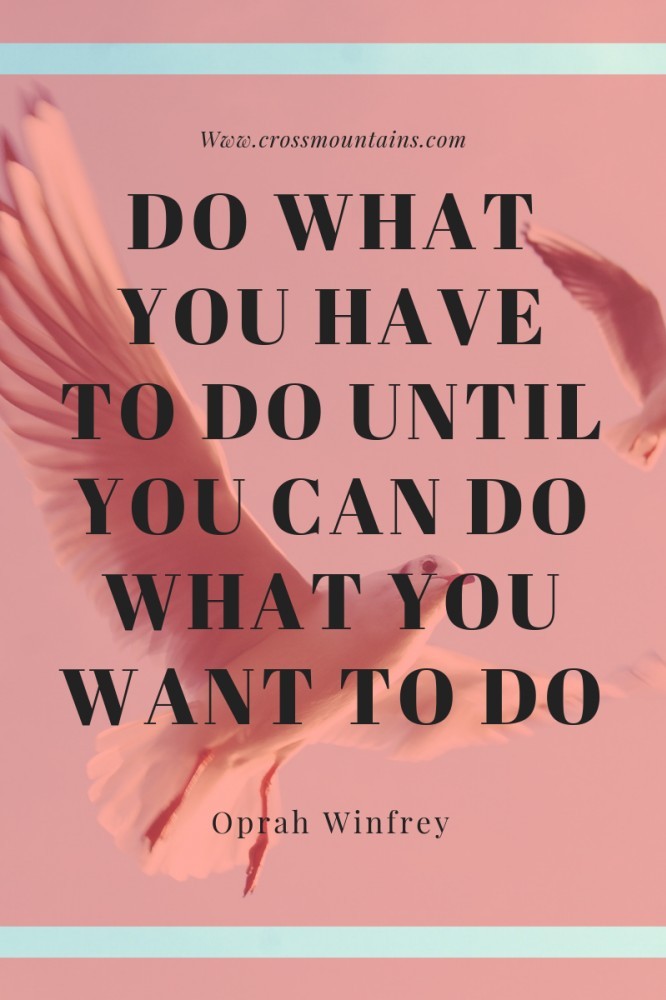 Oprah tells the story of when she was offered a job with a higher pay. She told her present boss, who then told her they wouldn’t be offering her a higher pay but he will advise her to stay. He said she still had a lot to learn about writing the news.

So after some reflecting, she decided to stay with her present job in order o improve her writing skills before moving on to better opportunities.

Did she want the higher pay, yes but she did what she had to do in order to be better equipped for what she wanted to do?

Also Oprah making the decision to lose weight because she felt this was the reason why she did not get the part of Sofia, was another example of doing what she had to do, in order to do what she wanted to do. 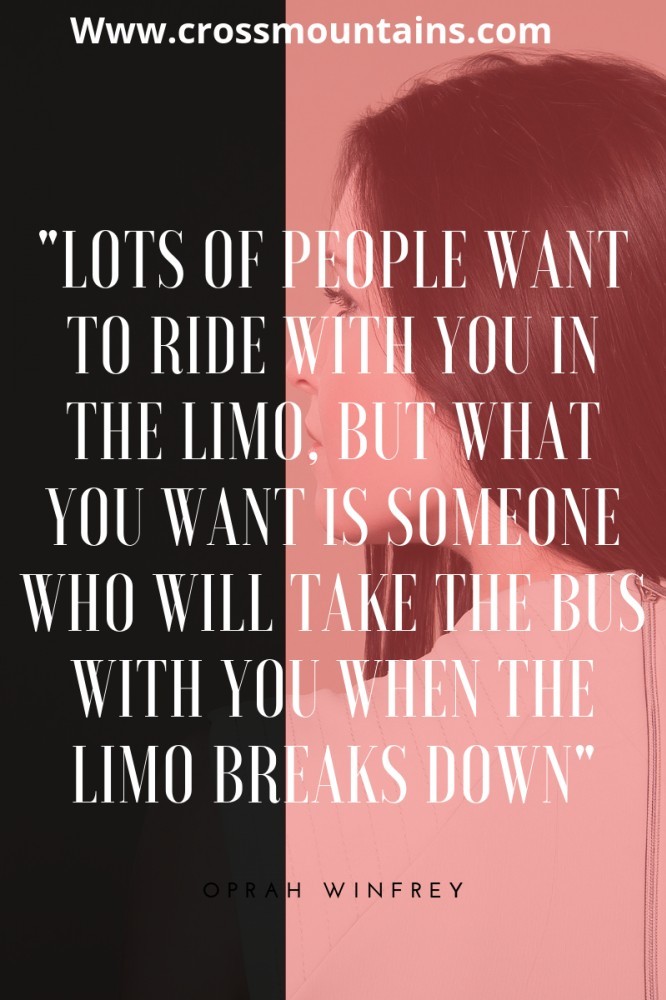 Oprah has had a long time best friend called Gayle King. They became best friends when Oprah was 22 and Gayle 21 years old. This was before the Oprah Show, before her numerous failures which stepped her up to her present successes.

Gayle has been there for her through tough and good times. They bought still support each other till date.

Oprah talks about always being able to count on Gayle and her longtime partner Stedman Graham, to be honest with her.

Having real friends who make you feel less lonely gives you ones less reason to cry during tough times. 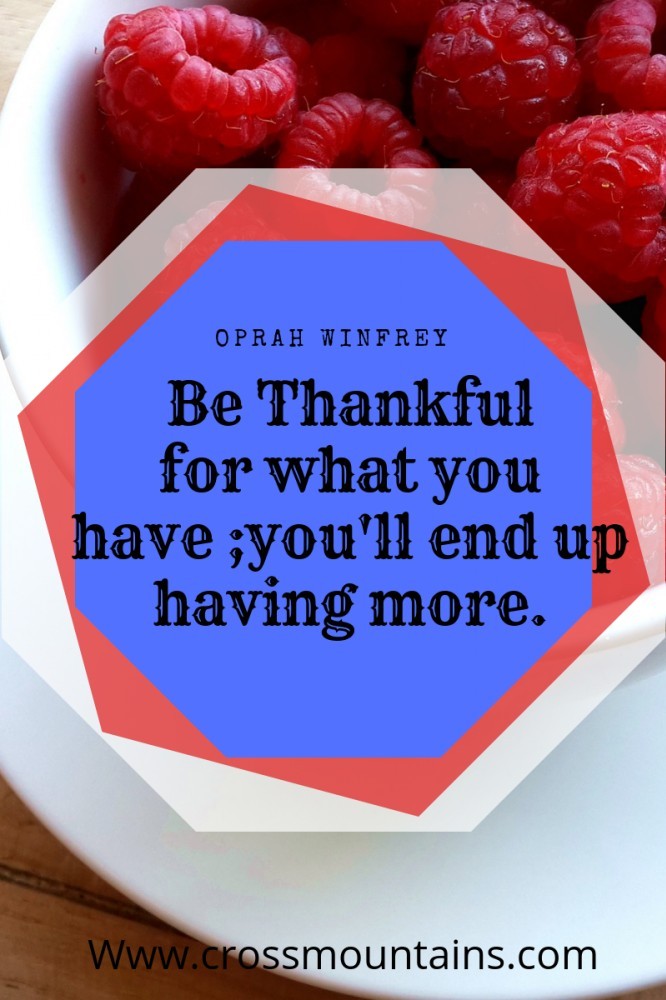 Oprah is very big at saying thank you

A great way to say thank you for coming and definitely encouraging more people to come.

Oprah also once paid for a trip to Hawaii for all of her employees, thanking them for their awesome service. This encourages the employees to work even harder.

Being thankful for the good things you have even during hard times can definitely lead to more good. 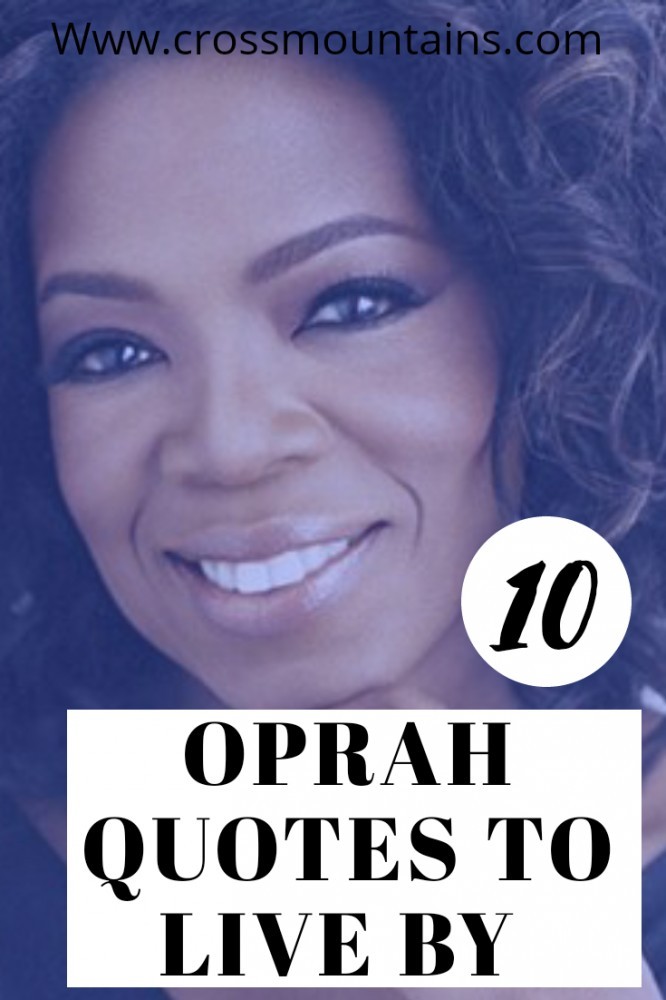 Next on my list of Oprah quotes to live by also focuses on gratitude. Oprah loves to talk about the importance of gratitude and how she practices it.

She keeps a gratitude journal and like many of us during hard times she finds it difficult to find things to be grateful for. On these days she begins by being thankful for her breath and works up from there.

7. Turn Your Sorrow Into Gold 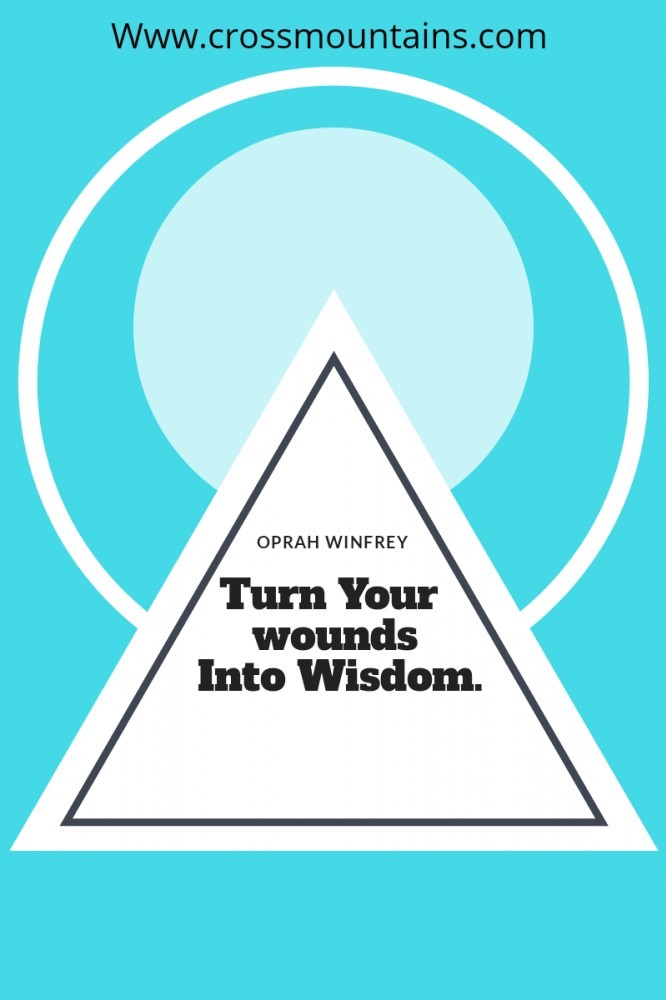 All of these wounds and many more was a learning experience for Oprah.

From the bad relationships and disappointments she experienced, she learned.

“If a man wants you nothing can keep him away if he doesn’t want you, nothing can make him stay”.

” You are responsible for your life, you can’t keep blaming somebody else for your dysfunction. Life is really about moving“.

Also, I strongly believe that all the challenges or wounds Oprah has experienced molded her into the highly compassionate person, who people feel very comfortable sharing their weaknesses and struggles with. She understands and can relate to pain.

8. Be Thankful For Challenges 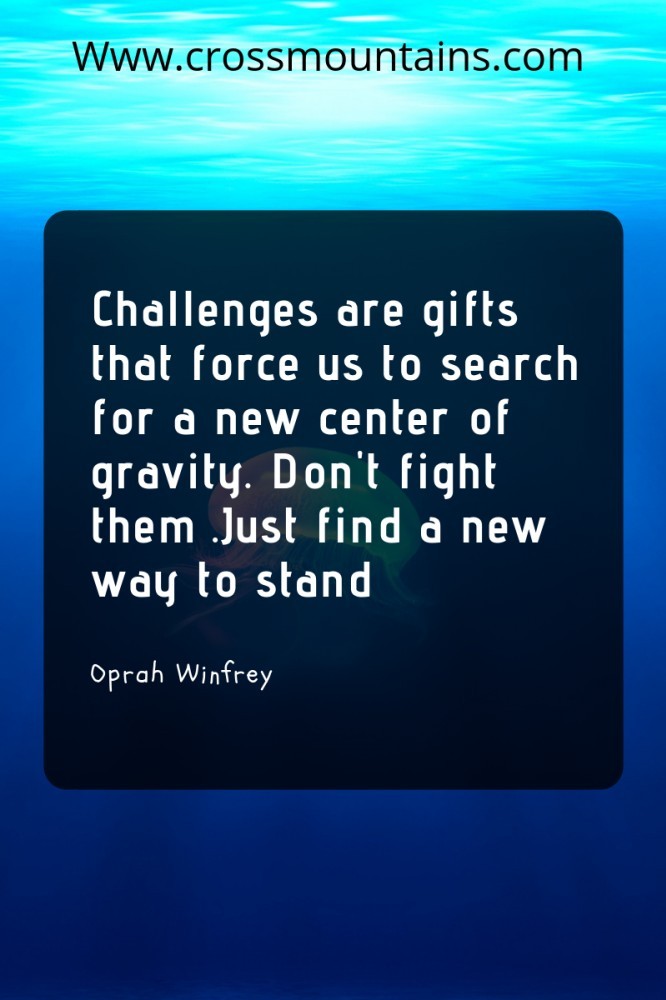 Challenges have a big role to play in Oprah’s journey to becoming the owner of her own network.

She went into this step believing she could have a network which aired only motivating/inspiring conversations. After the challenges she faced due to this misconception, she had to reevaluate and find a new center of gravity.

Oprah also talks about God having a greater plan for us than we do for ourselves and I believe he lead us through challenges. She initially planned to be a news anchor but the challenges she faced with her inability to emotionlessly read the news led her down a rocky road which ended up with her hosting the highly successful Oprah show.

9. There Is Time For Everything 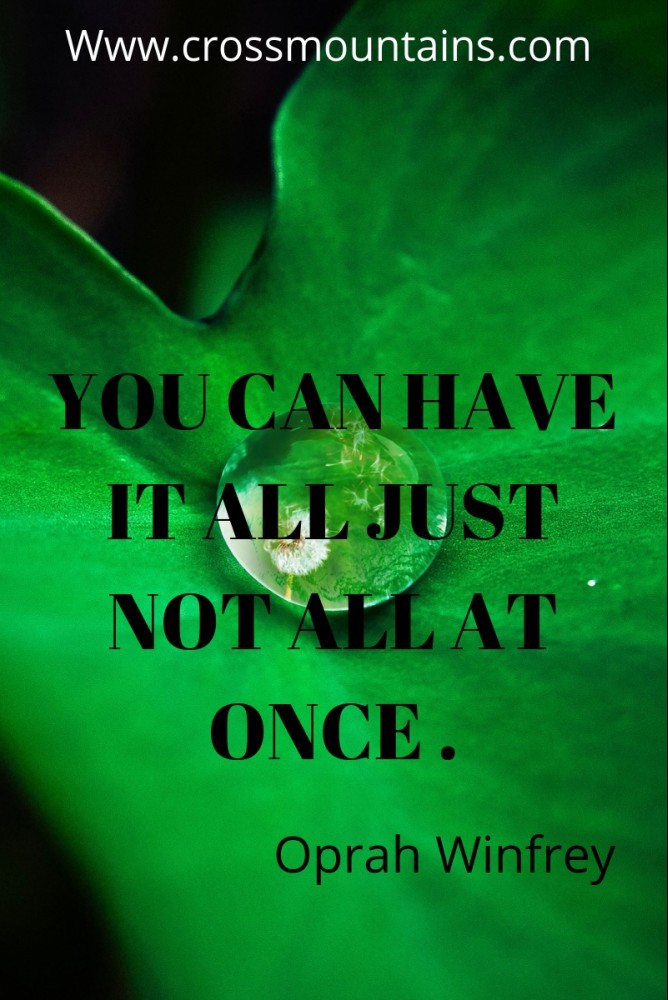 Next on my list of Oprah quotes to live by could be related to “There is time for everything “.

When Oprah was a news anchor she didn’t have the Oprah show. She had to give up the Oprah show in order to start her new journey of opening her own network.

This is a great quote for hard times as it reminds us of the importance of letting of somethings in order to create room for others. 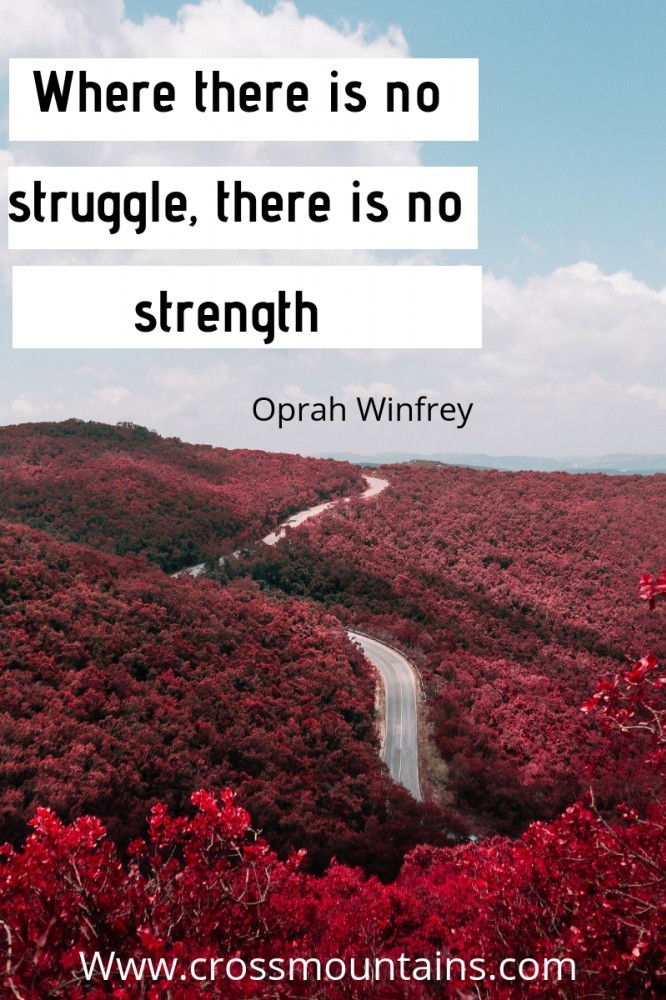 I believe this Oprah quote to live by summarises Oprah’s Life.

All the struggles she has faced along her journey has molded her into the strong woman she is today. 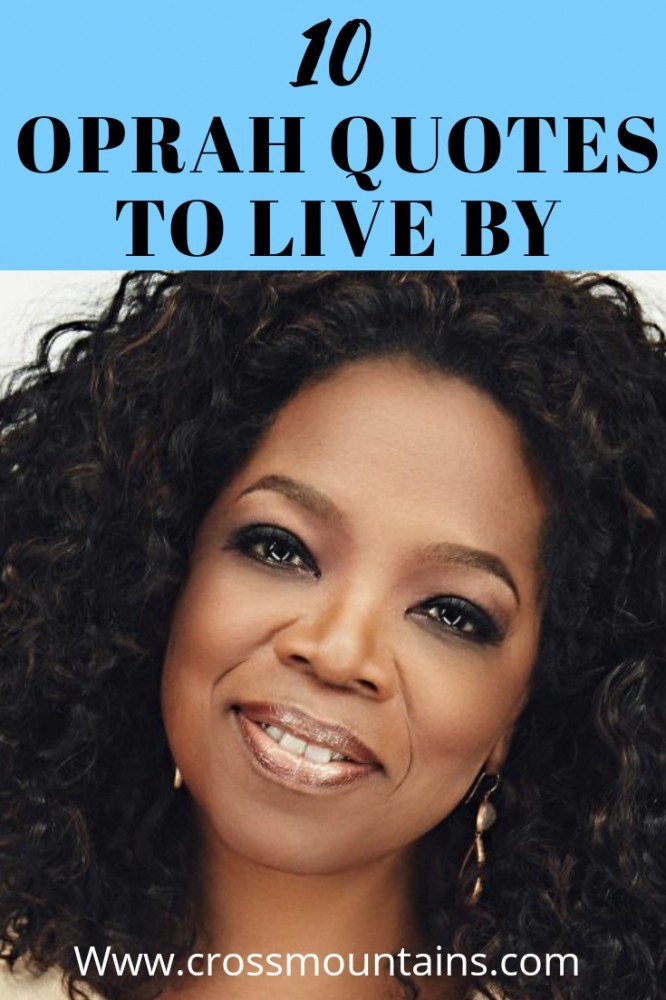 20 Motivating And Enlightening Quotes For Discipline